Purchasing a villa or country house in Son Font

Son Font is an urbanisation approx. 500 metres above sea level high above the village of Calvia, which is also the administrative headquarters of the district of the same name. The centre of the village with its excellent infrastructure (shops, banks, doctors, town hall, church) is only a 3-minute drive from Son Font and just 15- 20 minutes by car to the popular towns of Paguera, Santa Ponsa, Port Andratx and Palmanova. Son Font has been developed over the last 50 years by the family who own Predio de Son Font. The family still lives in the impressive manor house which is situated midway in the urbanisation. Son Font has only 115 plots, most of which are occupied by villas and country houses. The majority of plots have at least 4,000 m² of land, and some significantly more, allowing the owners the maximum amount of privacy possible.

Due to its elevated position (a journalist wrote: “Here you can tickle the soles of the gods”), most of the properties have a fantastic view over the surrounding landscape (as far as the village of Calvia) and breathtaking sea views that reach as far as Ibiza.

Owners here come from all over the world (Spaniards, Germans, British and Scandinavians), including many current and former business leaders who yearn for its ideal combination of nearby accessibility to amenities but at the same time protected privacy. The urbanisation has only one access which is under video surveillance, thus guaranteeing a high standard of safety for the owners. The main road, Cami de Son Font, winds to the highest point of the urbanisation from where there is a very nice, hiking trail which leads to the mountain village of Galilea. If you are interested in buying a villa or country house in Son Font, then place your trust in Minkner & Partner – Mallorca properties, the specialist for villas and country houses in Son Font / Calvia.

Son Font was split into plots over 50 years ago and building commenced. With the exception of the manor house and the small hunting lodge Cas Garriguer (already featured on old maps as far back as 400 years ago), the majority of properties are mainly houses that have been built in the past two decades and not, as expected by some, old fincas. The older houses have been thoroughly renovated over the past few years and many of them have been completely gutted and re-built. Building regulations state that the villas must have Mediterranean character.

Another building style that is highly favoured is that of an elegant country house. On a plot of 4,000 m² a property of 250 m² + basement + terraces + pool may be built, and although many older houses are significantly larger, they generally enjoy ‘acquired rights’, which come into play 8 years after construction. You can also rely on the experts of Minkner & Partner with regard to questions relating to building laws. 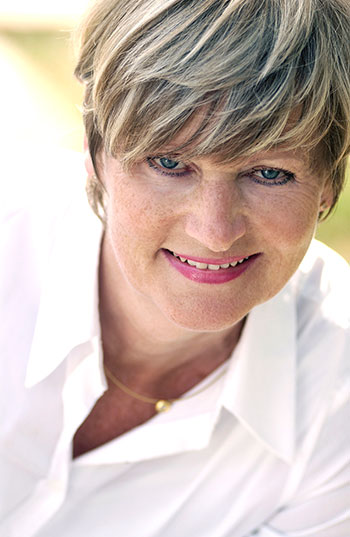 Just a three-minute drive from the village of Calvia is the urbanisation Son Font which is surrounded by an undulating landscape and sits approx. 500 metres above sea level.

“Son Font does not reveal its attraction if one only travels the Cami de Son Font to the beginning of the hiking route to Galilea,” says Karin Ebermann.

” However, I can open the doors to the impressive villas of Son Font and only then will you feel its unique atmosphere and appreciate the sensational views. I always find Son Font exciting and the properties motivate me, which is probably the reason why no other Mallorca real estate agent in Son Font has sold as many properties as Minkner & Partner “.