We have been living in Mallorca for 24 years and are at home here, but we are still discovering, on a daily basis, new things about the history, culture and people of this beautiful island. Fortunately, we have an extensive “Mallorca-library” to which we constantly refer in order to answer the many questions put forward by our friends, guests and clients. You can find some interesting facts about Mallorca on this page. How about a “Mallorca quiz evening”?

As early as January the first almond blossom starts to open and unfurl its white through to pink splendour and it remains in bloom until mid-February. Numerous almond groves can be found in villages such as Bunyola, Selva, Lloseta and Inca, which sit at the foot of the Tramuntana mountains and in addition to offering good soil are also protected by the mountains. Other areas on the island where it is possible to see the almond trees in blossom are the areas of Andratx, Soller, Calvia, Felanitx and Santanyi. There are approximately 6 to 7 million almond trees on the island that have been here for more than 1,000 years dating back to the time when the Arabs occupied the island. The almond harvest starts in September and produces an average yield of 1,000 tons.

Beaches
Long white beaches, small bays with sandy beaches, rocky inlets, Mallorca has a wide variety of beaches which, according to official statistics, total 179 and to which 50km of coastal strip is to be added. This means that approx. 10% of Mallorca’s 491 km coastline is beaches. 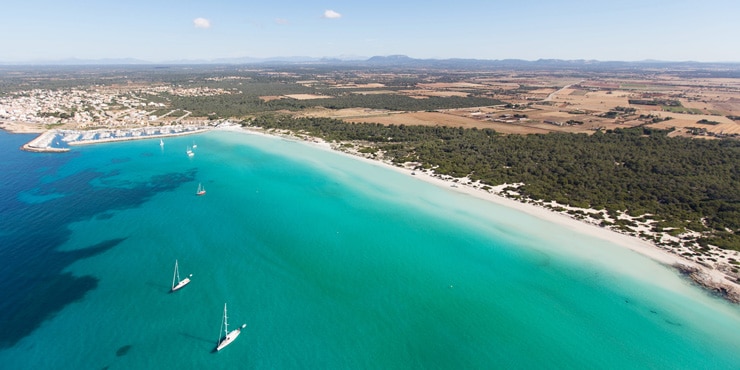 Caves
Caves on Mallorca are still a largely unexplored area. The entire island is crossed by an underground network of caves. There are approximately 4,000 caves and grottoes. So far 300 very large caves have been explored, only a few of which are accessible to the public. The best known are the 177 metre long, and 30 metre wide, Coves del Drach which also boast a 14 metre deep lake (Porto Cristo), and the Coves dels Hams, whose formations are reminiscent of a sunken city, with its buildings, animals and people (Porto Cristo). Other caves are the Coves d`Arta (Arta) with the “hall of a thousand pillars”(limestone formations) and the Coves de Campanet with bizarre stalagmites as well as the Coves de Genova (Genova), which reach a depth of 39 metres. The caves, are open to the public and in order to make them more appealing to tourists some of them have had elaborate lighting systems installed as well as illuminated boats on small lakes and short classical music concerts.

Inhabitants
Mallorca has 876,000 inhabitants’ half of whom (434,000) live in the city of Palma and surrounding area

Languages
Two languages are spoken on Mallorca mainly Spanish (Castilian) and Catalan. Spanish and Catalan are two independent languages, so the oft-made statement that Catalan is a dialect of Castilian Spanish is incorrect. However, the Mallorquin spoken in Mallorca is a dialect of Catalan (which is, however, denied by the nationally conscious Mallorquins).When Jaime I re-conquered the island in 1229, Catalan was the language spoken on the island. At the beginning of the 18th century, Castilian became the official language and from 1716 it became the mandatory teaching language. Under Franco, Catalan was oppressed but re-established itself following Franco’s death. Since 1978, Spanish has been the official language for all of Spain. Catalan is, however, an equally official language. During election campaigns, the language debate is constantly being bandied around. At present, official publications are often only written in Catalan. Catalan is spoken by about 9 million people in Spain in the three autonomous regions of Cataluña, Valencia and the Balearic Islands. 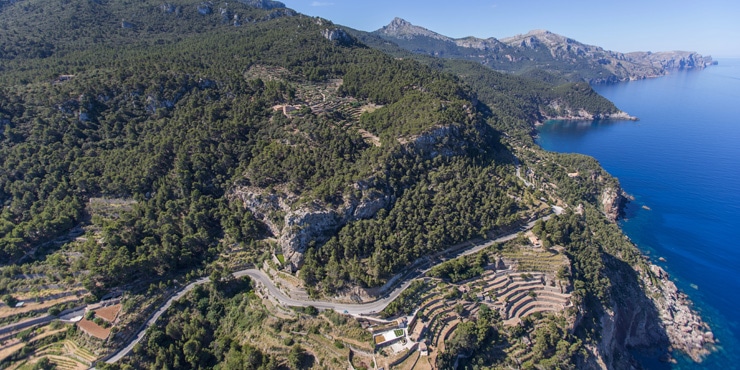 Name
The name of the island of Mallorca comes from the Latin “insula maior” (the larger island) which is how the Romans referred to it in comparison to its sister islands Menorca (“the smaller”), Ibiza and Formentera.

Olives
Since the time of trade relations between the Phoenicians and Greeks and the island of Mallorca, olive trees and the production of olive oil have existed on the island. The intensive trade in olive oil began in Roman times and olive production reached its peak in the 16th century when the highly desired olive oil was shipped from Soller to North Africa and France. Although trade in olive oil is now exposed to strong international competition, 11,000 hectares of land, with a total of 750,000 olive trees, is still cultivated. A large amount of olive trees on Mallorca are between 300 and 500 years old.

Ports
Mallorca has a total of 43 ports. Many of them were originally only used for fishing, but today they have developed into remarkable maritime ports with around 15,000 berths. 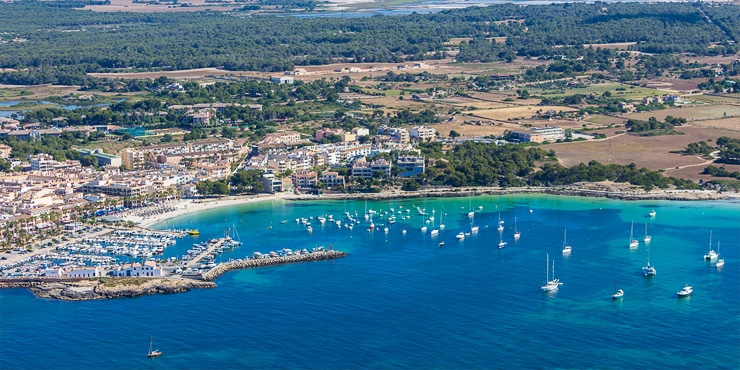 Salt from Mallorca
A popular souvenir of Mallorca is the “Flor de Sal d`Es Trenc”, which has made a good name for itself internationally as a high-quality natural product. Unlike ordinary cooking salt, this salt is a pure natural product. During the entire process, the salt remains intact and nothing is added. Drying takes place in the Mallorcan sun after which it is extracted by hand. The manufacturer states that the salt contains 80 vital minerals and trace elements. The best days for harvesting are those with lots of sun and low humidity. A gentle wind from the south, south-east crystallizes the salt blooms (hence Flor de Sal), causing the salt to float on the surface of the water from where it is skimmed off with long rakes. Afterwards, it is dried on long tables, and remains in its natural state or is mixed with herbs, spices, flowers or olives. The Salines d ‘Es Trenc can be found on Carretera Campos – Colonia de Sant Jordi, Km 10. 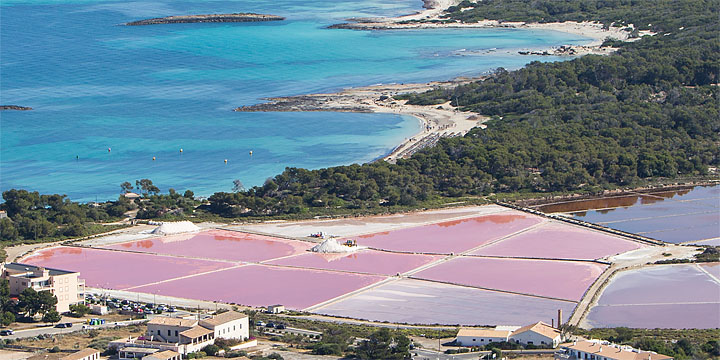 Siruells
Siurells, the ceramic figures that emit a sound like a flute, are now popular with tourists to take home as a souvenir as they can also be used as toys. However, no-one knows what they were originally used for. The figures usually represent riders, women or mythical creatures, such as the devil, dogs with two legs or donkeys with wings. Inside, the Siurells have one or two pipes. Archaeological findings prove that comparable figures existed in Mallorca as early as the 12th century. However, it is believed that they originally came from Greece or Italy, although similar figures are also known in South America and even Russia. The centre of production of siurells is Marratxi, where the annual pottery fair “Fira del Fang“takes place and they can be purchased on the market in all possible shapes and sizes. The siurell is made from clay which is fired and placed in a lime bath, following which colourful lines and dots are painted on the white background. Experts can tell from the colour scheme, from which village a Siurell comes from.

Tela de lenguas (Llengües) material from Mallorca
In fincas and country houses, the traditional fabric ‘ lenguas mallorquinas’ (Llengües) is used for  curtains, bedspreads and throws for sofas  as well as cushion covers and tablecloths  They are so called because of the tongue-like pattern in traditional blue, red or yellow on a white background. Woven from cotton and linen, this fabric has been around for centuries on Mallorca. Probably the weave comes from East Asia and was brought to Mallorca by the Moors. Fabrics from ancient times still prove a weave with cotton and silk, which is, however, today hardly to find due to the higher cost. Currently, only three workshops in Mallorca produce this material, namely Bujosa in Santa Maria, Vicens in Pollensa and Riera in Lloseta. The fabrics are made on large looms. The yarn is dyed by hand before processing. Recently, young designers of the fabric have also added new products: lampshades, book covers, handbags, bath accessories and textile wall coverings. In Pollensa, there is even a museum which tells the history of Llengües and includes a weaving demonstration.

Water supply
The average rainfall in Mallorca is 550 litres per m² per year. Part of this rainwater will be stored in huge, natural, underground deposits. In addition, two reservoirs store 10 million cubic meters of water, which are used to supply Palma alone. The underground water is pumped into wells where it is treated for consumption.

Weather
Mallorca is rightly called the sunshine island, as it has an average of 7.9 hours of sunshine every day. The island is characterized by a moderate subtropical climate with low rainfall. In the summer, it hardly rains and temperatures can reach 40 degrees. The winters are mild and humid. The average rainfall is 550 liters per m² annually. Occasionally, especially in the mountains, snow falls.

Windmills
For centuries windmills have shaped the landscape of Mallorca. Only on Crete are there more windmills over a comparable surface area. There is a distinction between windmills for grinding grain and water windmills. Cereal grinders can be recognized by their wooden blades and pointed rooves and there are approximately 1,000 on the island. The much smaller water mills with the arrow-shaped blades total some 2,500. This distinction also reveals the different tasks: the grain mills were used to grind the grain, the water mills to provide water for agriculture and the peasant population. Today, a society is involved in the restoration and maintenance of the mills, many of which are dilapidated and only a few of them serve their former purpose

Wine
During the Roman occupation, wine was already cultivated on Mallorca. Wines from Mallorca were traded internationally as early as the 13th and 15th century. Owing to the phylloxera plague in 1891, numerous vineyards were destroyed and replaced by almond and olive groves. It is only in the last 50 years that winegrowing on Mallorca has experienced a rebirth. Initially, it was mass produced, however, today, award winning wines are also produced. The total cultivated area is 2,300 hectares. The annual production is 54,000 hectoliters. In 2017, the 54,000 hectoliters were divided as follows; 44% red wine, 32% white wine, 24% rosé wine. Although prices for 2017 rose by 10% – 15% in almost all bodegas, all report good sales figures. Some bodegas soldl out early, so you have to be quick to order. 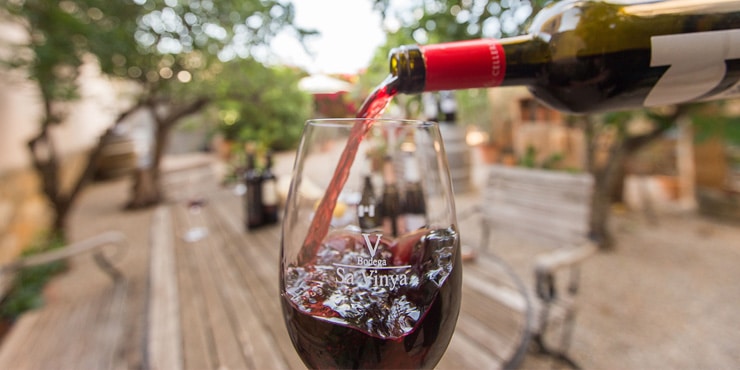